I always love working in pencil.  I have a lot of works in progress, some of which I do intend to add color to.  I love that so much about working digitally – that I can save the work in different steps or color them in a digital painting program or Photoshop and really retain the original style of my linework in pencil.

Another of my favorites is character designing.  It really allows me to hone in on my love of drawing people and the costume or clothing they wear, without worrying about the background.  Of course this leads to the problem of having a million quick sketches of people that don’t look finished, but I gather most artists have exactly the same problem.  Better too many, than too few!  Here are some of my favorites.

This is from several years ago but I still love her! Another thing I love about digital work: her arm unfortunately went up to the end of the page. I could complete her arm on another piece of paper and reattach it via digital surgery!

This is from the same time as the previous image. I was doing a lot of character sketches then, hence they are background-less.

Ladies of the harem has always been a favorite drawing subject of mine.

One of my favorite historical figures is the infamous Henry VIII...perhaps I had been watching a lot of The Tudors at this time. Here I've depicted a fantasy illustration of Katherine of Aragon, Anne Boleyn, and Jane Seymour, the first three of Henry's six wives.

This is a bit more modern, and almost minimal except for the top of her pants!

This character involves quite a crazy melange of styles - she evolved from a world I imagined in order to create a cohesive set of characters. As the story goes, Queen Melaina was supposed to be from the "dark" side of the world, though neither side was good or evil. Really, she was just a complete hedonist hence her indecisive mash-up style. I need to finish putting the dot texture on her stockings.

This was a pirate inspired character sketch for a different made-up scenario, which a friend came up with. 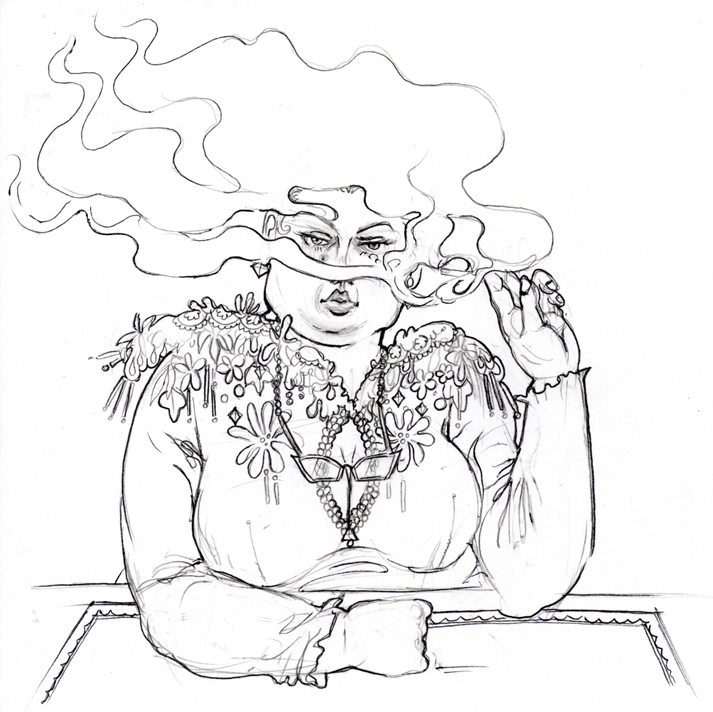 I designed her to never be fully showing her face. Instead it's obscured by her constant cigarette smoking - much like the aptly named male version in The X Files.

Again, we conclude with the message that all the work here is my property, but if you are interested in using it for something you need only email and ask – courtneytrowbridge@gmail.com.  I’d like to hear about what it will be used for, and most likely will be okay with it.  Your motive there is I have much higher resolution files of the work.  I also do commission work.  Thanks!

One thought on “character sketches in pencil”