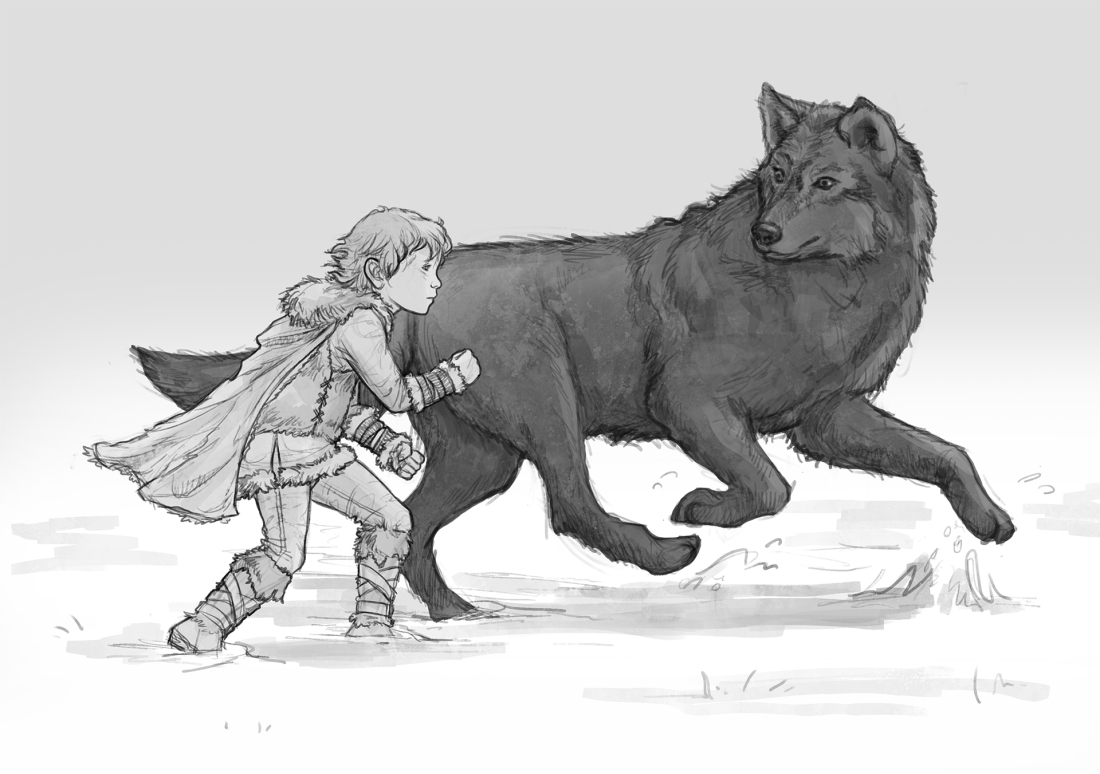 Today’s prompt: “snow nomad and his shaggy dog”.
CLEARLY they meant I should do behbeh Rickon Stark and Shaggydog living the tough life on Skaagos. Since I missed yesterday because headache, I made it a bit nicer. 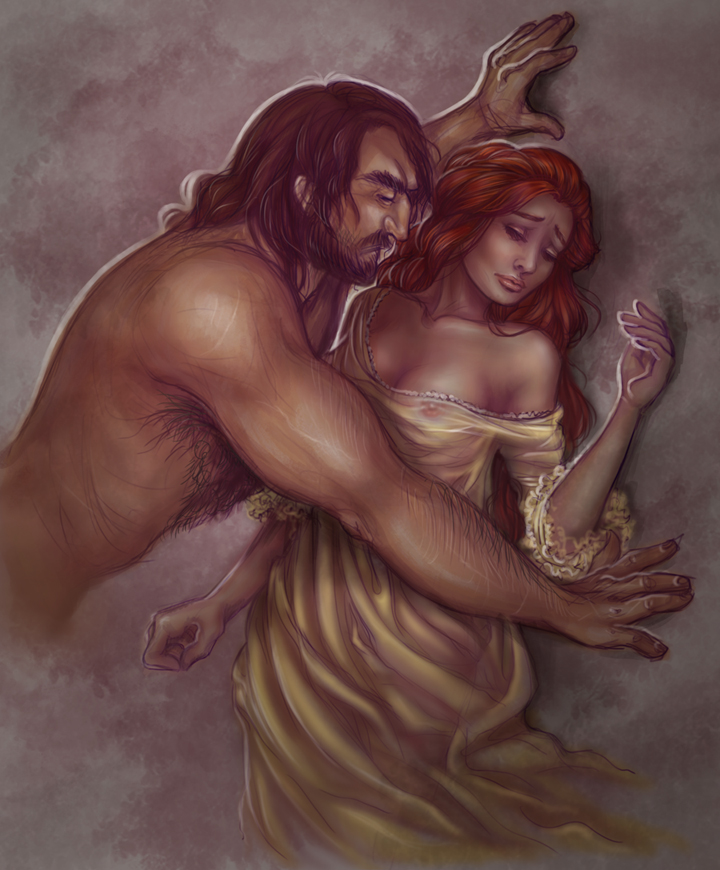 You know, I showed this to someone at a small dinner party and later when I was sober, I realized this is a bit ridiculous.  But that’s okay!

We’re done with rage for now, and there’s a sort of grim acceptance and some dubious consent, sorry guys (not, really). ;D 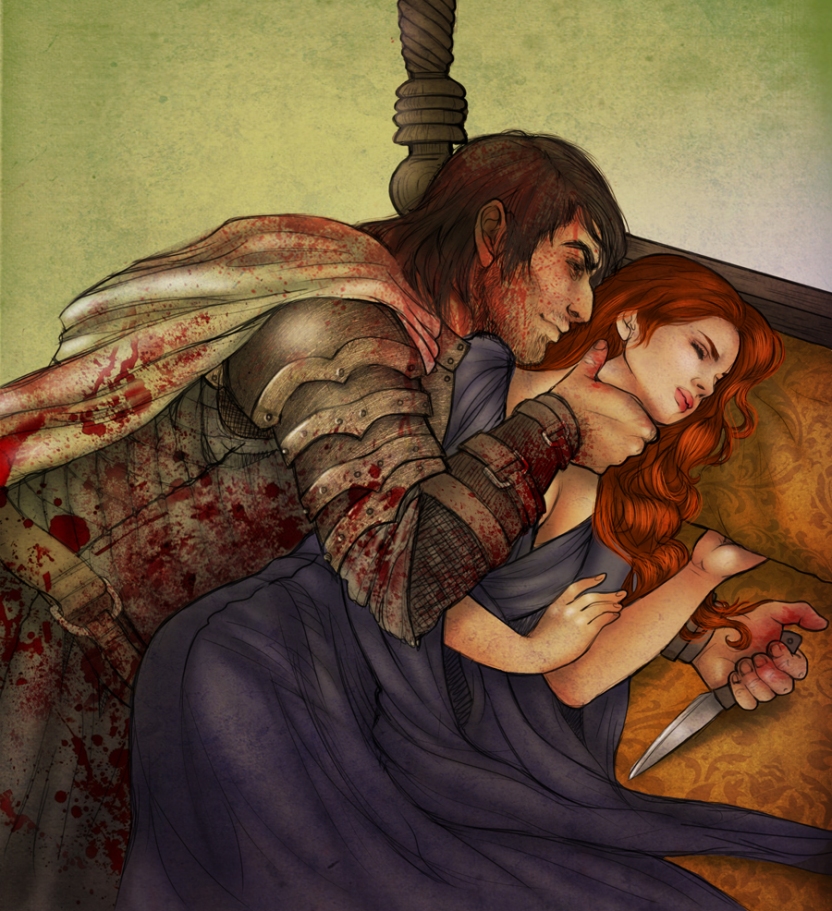 “I could keep you safe,” he rasped. “They’re all afraid of me. No one would hurt you again, or I’d kill them.” He yanked her closer, and for a moment she thought he meant to kiss her. He was too strong to fight. She closed her eyes, wanting it to be over, but nothing happened. “Still can’t bear to look, can you?” she heard him say. He gave her arm a hard wrench, pulling her around and shoving her down onto the bed. “I’ll have that song. Florian and Jonquil, you said.” His dagger was out, poised at her throat. “Sing, little bird. Sing for your little life.”

You know you have a problem when you randomly find a picture of Lana Del Rey on someone’s blog, who’s chiding her for the themes in her music video seeming to portray a complacency toward domestic violence, and you instantly think, “oooh goody…wouldn’t this be a great reference photo for some SanSan?!”

Characters belong to George R.R. Martin and HBO’s A Game of Thrones. One of my favorite textures right now I must credit to ~Insan-Stock [link] 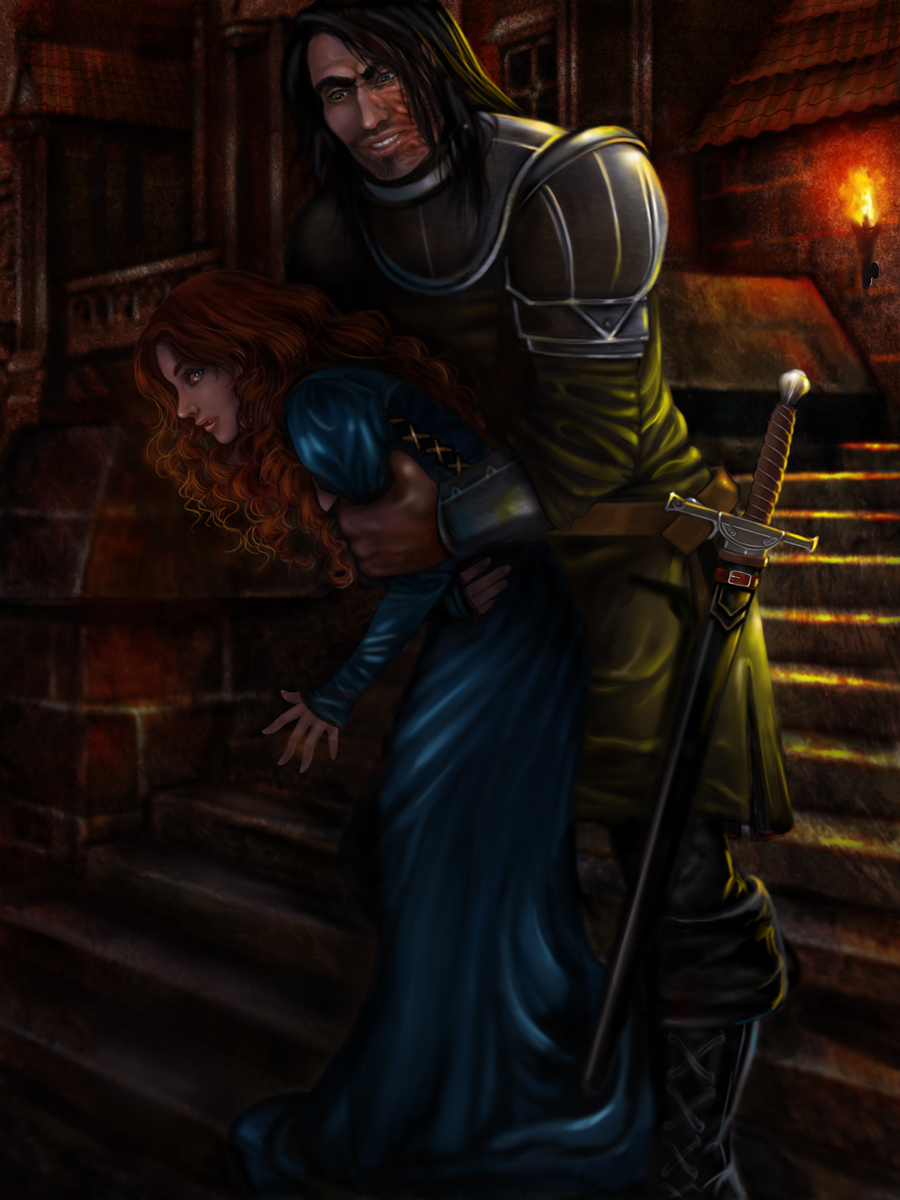 Sansa is running back to her room after her first meeting in the godswood with Dontos, and who should just happen to pop out of a hidden door…?

Characters © George R.R. Martin’s A Song of Ice and Fire and HBO’s Game of Thrones. 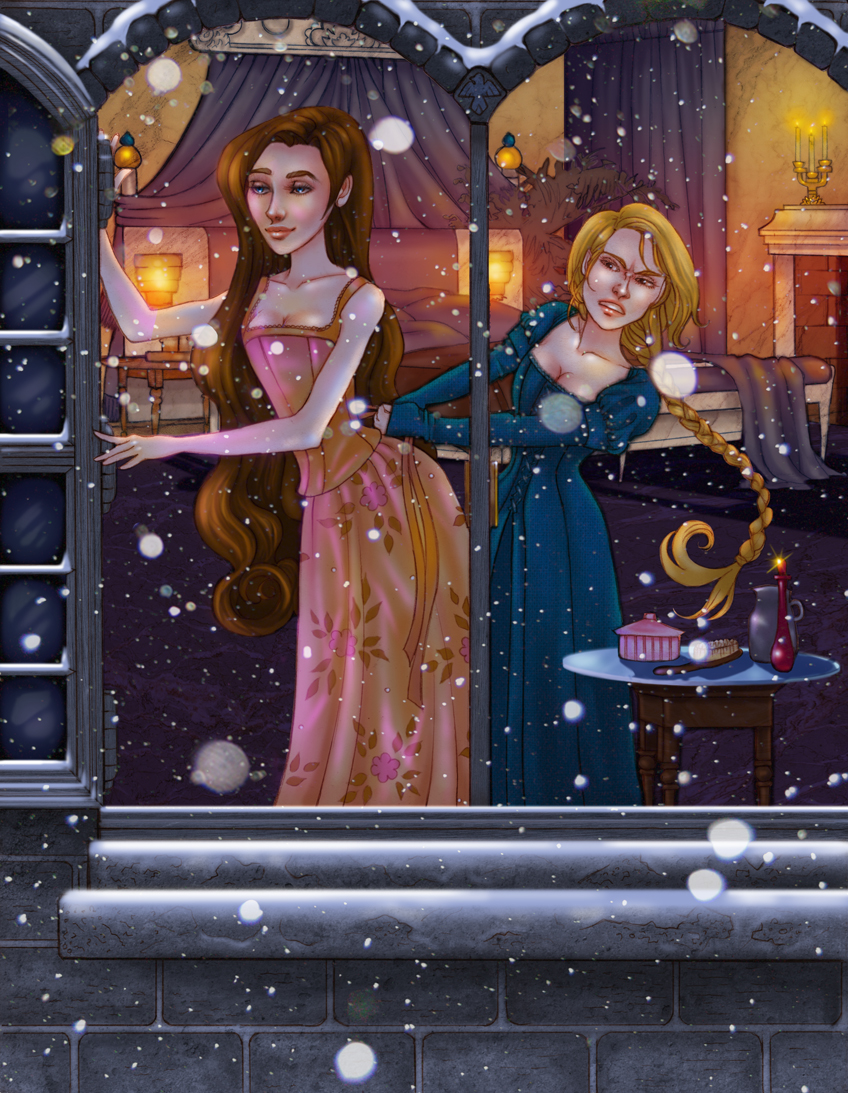 Alayne Stone never minds the winter chill, even if her maid does. She’s not feeling herself at the moment.  She’s dreaming of Winterfell, but how can that be?  She’s never been to Winterfell before! :)

The snow falling image used is not mine and can be found here, thanks to the lovely mimose-stock, though I doctored it up a lot.  Alayne Snow is a character that is copyright of George R.R. Martin and from his series A Song of Ice and Fire. 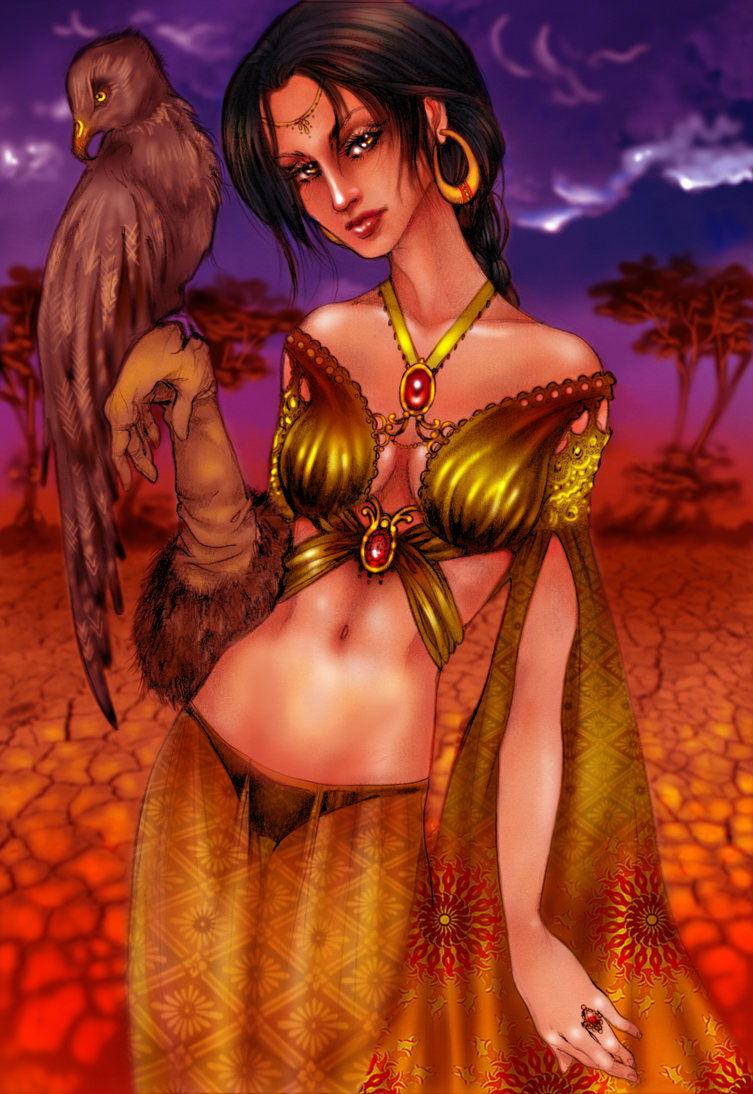 She might be my favorite of the Sand Snakes…it’s just so hard to choose!  I drew this aaaaages ago, and it looked like Nymeria Sand to me.

So, I haven’t been using this blog quite as often as before, apologies, but I’m still working quite a bit!  :)

I had a recent reevaluation of the meaning of fanart, after becoming obsessed with HBO’s A Game of Thrones, and then reading and RE-reading the entire ASOIAF series.  No, really…I’m on book five again, about a third through.  Completely off topic, A Dance with Dragons is so much more enjoyable the second time around, for those who felt it wasn’t quite up to their expectations.  I spent a lot of the first read being confused about which Reznak was which, and keeping Yunkai’i commanders and sellsword captains straight.  Not so now!  You realize there aren’t quite so many of them as previously thought.

Anyway, back on track here.  After really seeing how much incredible artwork the series has inspired, I decided to join in the fun.  Fanart, fanfic…it has a scary connotation, right?  It brings poorly written, alt endings to the Twilight saga to mind, or something.  But in reality, getting your art skills up by messing around with fanarts is a great way to practice interpreting client requests, since it starts your work out with a specific set of parameters.  And who hasn’t noticed the artbooks that are often the result of cult media?  With the right attention, suddenly fanart becomes licensed art!

This may have some slight spoilage if you are still on book one or only watching the tv show, FYI.  But little can really be gleaned from the image as to what all is going on (ie, no one is getting their head chopped off in this pic).

Leaving some extra space for you to decide, if you’re reading… 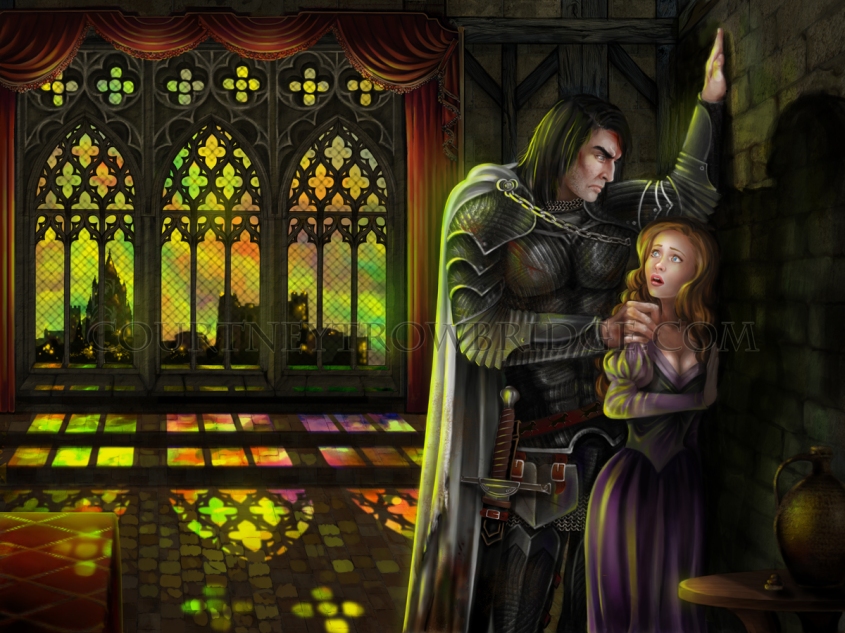 Here’s the link on my deviantART too:
http://courtneytrowbridge.deviantart.com/#/d4cgy0q\